The health benefits of pepper

Always reaching for the salt despite health warnings? We discuss the effect salt has on your body and introduce the health benefits of pepper, the tongue-tingling dinner-table companion of your sodium-laden condiment.

Salt facts: The effect on salt on your body

Salt and pepper are staples in kitchens and on dinner tables throughout the Western world. Table salt, known to scientists as sodium chloride, has been a seasoning of choice since the beginning of mankind. At first we existed on the natural salts found in food and plants, but later we extracted it and used it both to season food and to preserve it. It became so valuable that is was used as a currency. Our taste for salt escalated until today, when sodium is found in almost everything we eat. To many modern tongues, food without salt tastes bland and boring.

However, our bodies need just 5 grams of salt a day to perform a variety of metabolic functions. That’s just one teaspoon! In the correct amount, salt stabilises an irregular heartbeat and helps regulate blood pressure, helps extract excess acidity from the body’s cells (especially in the brain), stabilises blood sugar, helps nerves communicate and clears the lungs of sticky phlegm.

But most people consume far more than that – research has shown that the salt intake of some South Africans seems to be as high as 40 g a day, most of it coming from processed and restaurant foods. In fact, according to the Heart Foundation, bread is the single highest contributor to the total salt intake of South Africans. Americans like it even more – as a nation they consume more than 6.5 million tons of table salt every year. (Read more about the health pros and cons of salt in our blog ‘Should we pass the salt?’ 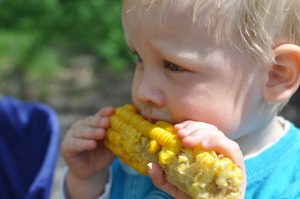 Children are not born with a liking for salt. Our fondness for salty foods is a learned taste preference. So it’s vital that children do not develop a taste for salt. A high salt intake in children can influence blood pressure and may predispose a child to the development of diseases such as high blood pressure, osteoporosis, respiratory illnesses (such as asthma), stomach cancer and obesity.

And that brings us to the prince of this week’s blog: pepper…

Instead of sprinkling your dinner liberally with salt, look at its tabletop partner, pepper. This tongue-tingling spice is an excellent source of manganese and vitamin K, and contains copper, dietary fibre, iron, chromium and calcium. Pepper’s active ingredient is piperine, a compound that, among other things, helps your body to absorb the nutrients derived from the food you eat. So, not only does pepper pep up (excuse the pun) your food, it actually helps your body make the most of the vitamins and minerals on your plate. So for those of you who like a pepper-crusted steak or fish fillet, tuck in, safe in the knowledge that you’re experiencing the many health benefits of pepper. 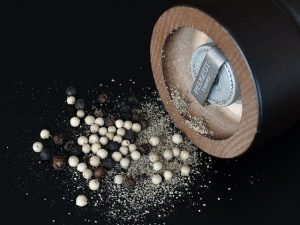 Black pepper Piper nigrum has been known and prized since antiquity for both its flavour and its use as a health remedy. Pepper is known to:

Not a fan of black pepper? Well, that’s too bad. White pepper contains very little piperine. And, says one source, ‘In case you were wondering, peppers and chillies don’t contain it either.’ You’ll find more about the health benefits of pepper, along with its intriguing history in our Herb Library and some great recipes in the recipe category of our blog.

So, salt or pepper?

The jury is not out on this decision. Salt is vital in small quantities, so use it sparingly.(We advise using natural unrefined sea salt or other natural salts such as Himalayan or Kalahari salt crystals. The sodium content may be similar, but they contain other useful minerals as well.) Instead, experience the health benefits of pepper by grinding it generously on your food.