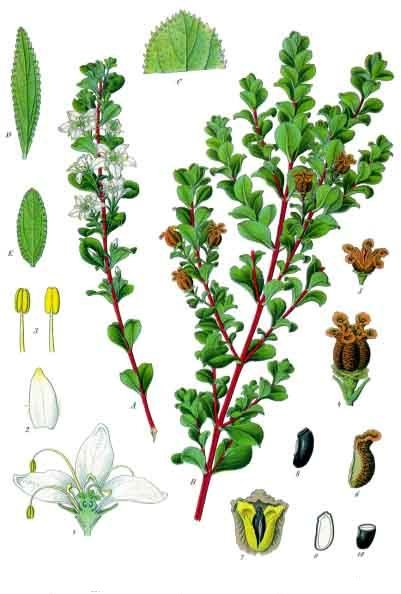 Buchu is one of South Africa’s best-known medicinal plants, and has been used for more than three centuries by indigenous people as an antiseptic and to treat urinary disorders. Indigenous to the southwestern Cape, buchu (Agathosma betulina) is a member of the Rutaceae (the rue or citrus) family. Its name stems from the Khoi name for the plant, ‘bookoo’. Early European settlers made a brandy from the leaves to drink as a digestive tonic.

The dried leaves. Buchu is available in capsule, tincture and liquid extract forms as well as dried leaves for tea. Buchu essential oil can also be purchased.

Buchu is used to:

Use the correct type of buchu!
When purchasing buchu products, make sure they contain Agathosma betulina and not A. crenulata. Buchu is mild with few side effects, and is well-suited for use by children and the elderly. As the plant is a diuretic, it depletes potassium stores in the body, so when taking buchu, supplement your diet with bananas or other potassium-rich foods. Avoid during pregnancy and breastfeeding, or if you have acute urinary inflammation.

‘Buchu is the most amazing plant,’ says immunologist Professor Patrick Bouic, chief technical officer at Synexa Group, an organisation that specialises in clinical trials and diagnostics. ‘Buchu-based remedies can be used to treat hypertension (high-blood pressure) and diabetes successfully, as both conditions are caused by underlying inflammation. It may also play a role in one of the most pressing issues facing us: the growth of antibiotic-resistant super bugs.’ Professor Bouic is working in collaboration with Stellenbosch University.

Although buchu is used in African cuisine to enhance flavour (the oil in the leaves has a taste similar to blackcurrants), the plant is not widely used in the kitchen. To make buchu tea, pour a cup of boiling water over 1 or 2 teaspoons of dried leaves and leave to infuse for 10 minutes before straining and drinking.

To make buchu brandy, or buchu vinegar to treat wounds, place a few sprigs of buchu in a bottle of brandy or white vinegar and leave to infuse for at least a week, shaking occasionally. Cloves may be added for extra flavour. Store in a dark cupboard. Drink a cup of tea three times daily; a tablespoon of buchu brandy can be taken twice daily.

Indigenous to the southwestern Cape, buchu needs deep, well-drained, coarse and gravelly soil, with full sun and no frost. If your growing conditions are suitable, the shrub can be grown from seeds, although these may be hard to source. Pink, mauve or white star-shaped flowers appear in winter and spring, and the bright green leaves provide a fresh aromatic smell throughout the year.