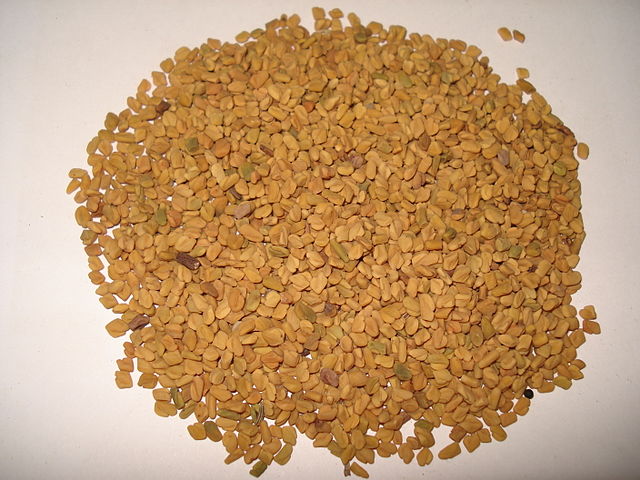 Fenugreek has an unusual flavour that has been described as ‘a combination of celery and maple syrup’ and has been recorded since biblical times. It was used by the ancient Greeks as fodder for cattle and horses. As the plant spread around the Mediterranean world, physicians discovered that its seeds contained a gummy substance called mucilage, which was used to soothe irritated tissues. Later, in America, it became a popular remedy for menstrual discomforts (called ‘female weakness’) and was also used to treat digestive problems, to induce childbirth and to stimulate milk production in breastfeeding women. Modern science has confirmed some of these ancient folklore remedies and today fenugreek is also recommended to reduce cholesterol and control diabetes.

The dried seeds are ground and taken by mouth or used to form a paste that is applied to the skin.

Scientists have confirmed that the seeds of fenugreek contain chemicals such as disgenin and oestrogenic isoflavones which resemble the female hormone oestrogen. Fenugreek also contains vitamins A, B and D, minerals and proteins.

Talk to your medical practitioner before taking any herbal supplements.
Side effects from taking fenugreek are few, although there are some reports of gas, bloating, and diarrhoea. Sweat and urine can smell like maple syrup, a sign that you are taking the correct dosage. Pregnant women are advised not to take fenugreek because it may cause uterine contractions. Applied externally, it may irritate the skin.

Fenugreek is a common ingredient in Indian dishes, especially curries.

Fenugreek, also called Greek hay and wild clover, is used both as a herb and a spice, and grows widely in much of India, Pakistan and Asia. Little information exists about it being grown in South Africa.

Marinate the chicken cubes in the lemon juice, salt, chilli powder, yoghurt, ginger, garlic and tandoori powder for at least half an hour (overnight is best). Preheat the grill.
Place the chicken on a baking tray set on the rack closest to the grill and grill for at least 10 minutes on each side or until cooked. Allow the chicken to cook until it just starts to char.
To prepare the sauce, heat and melt the butter. Add to it the cardamoms, cinnamon sticks and cloves. Stir-fry for a minute before adding the tomatoes and tomato paste.
Simmer on low to medium heat, half covered, for 15-20 minutes until the gravy thickens and the oil forms a film on top. If the gravy is too thick, add a little water.
Add the rest of the ingredients as well as the grilled chicken and simmer for another 15 minutes. Garnish with butter or coriander.