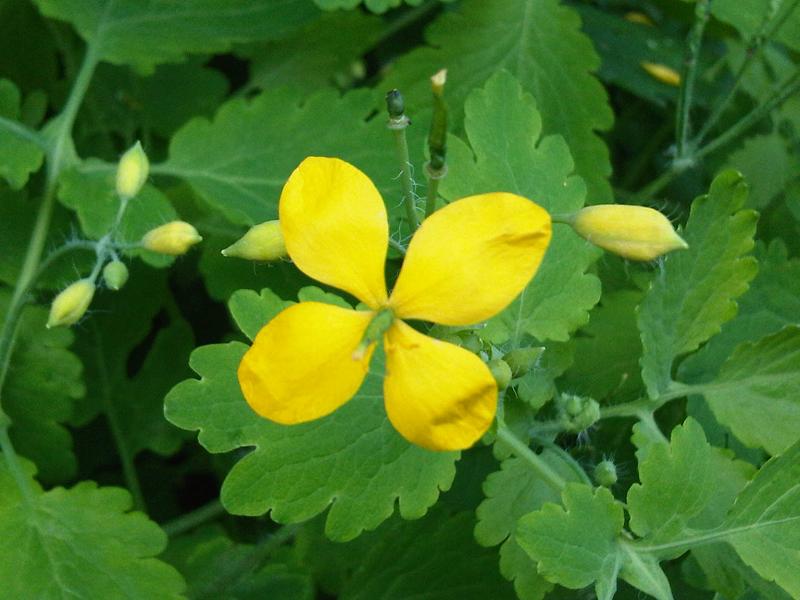 This pretty perennial herb with its vivid yellow flowers is indigenous to Europe, Asia and North Africa and is now naturalised throughout North America. When broken, its stems and leaves exude an orange-coloured juice that stains the hands and has a disagreeable smell. Greater celandine was used as a medication in the Middle Ages and is also mentioned by the early Roman author and naturalist Pliny, who claimed that the plant’s name, Chelidonium, stems from the Greek chelidon (a swallow) because it comes into flower when the swallows arrive and fades when they leave. The juice of celandine was used to remove the opaque film that may cover the cornea of the eye, and a drink steeped from the plant was supposed to be good for the blood. Other early alchemists believed that celandine’s yellow colour indicated that it was good to ‘superstifle the jaundice’. Modern herbal practitioners prescribe celandine as a mild sedative, antispasmodic and detoxifier to relax the muscles of the bronchial tubes, intestines and other organs.

The entire plant is used to create herbal remedies.

The main active ingredients in celandine are the alkaloids (nitrogen-containing compounds) chelidonine, which has an antispasmodic and sedative effect on the bile ducts and bronchi; chelerythrin, which is both narcotic and poisonous; homochelidonine A and B; protopine; sanguinarine and berberine (both strong antiviral and antimicrobial agents); and chelidoxanthin.

Studies in humans have shown extracts of greater celandine to stimulate the production of bile and pancreatic digestive enzymes and, indeed, the German Commission E has approved Chelidonium majus for liver and gallbladder complaints. Test tube and animal studies have shown greater celandine’s ability to protect the livers of animals from toxic substances.

Greater celandine is prescribed to:

Talk to your medical practitioner before taking any herbal supplements.
Celandine is a toxic plant, although its toxicity is greatly reduced when it has been dried. Overdoses can cause dizziness, stomach cramps and colic and it has been suggested that too much will cause liver toxicity. Avoid celandine if you have liver disease or are pregnant and do not give to children. Always consult your medical practitioner before embarking on a course of herbal remedies.

Celandine is not recommended as a culinary ingredient.

Chelidonium majus is a perennial that does well in most types of soil, as long as the ground is moist. Be careful though, as the plant self-sows freely and can easily become a weed, colonising gardens and open areas. Once established, the plant is very difficult to eradicate.