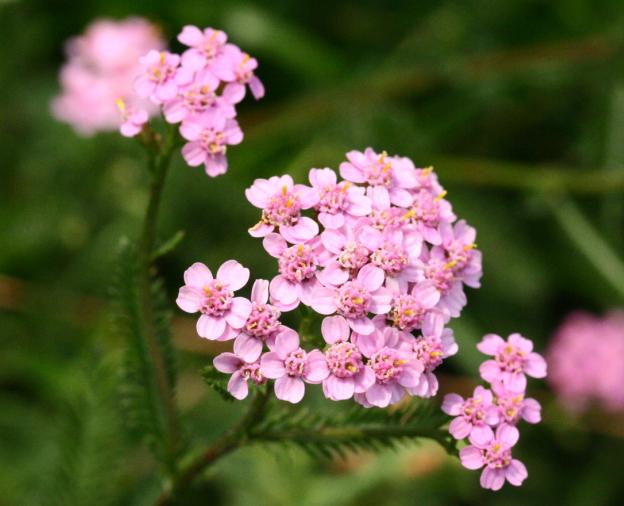 A species containing many forms, Achillea millefolium occurs naturally in Europe and western Asia, but is grown throughout the world for its ornamental and medicinal properties. It was traditionally used as a remedy to stop bleeding and promote the healing of wounds (it is reputed to have been used by Achilles to staunch the bleeding of soldiers injured in battle, hence the plant’s Latin name), and to treat hypertension, arthritis, fever and colds (the last by both Native Americans and in the British Isles). According to one source, yarrow ‘has the reputation of being a preventative of baldness, if the head be washed with it’. There’s no evidence to support the last claim, but yarrow has nevertheless clearly been regarded as an important herb since ancient times, as it is recorded as having been found in a Neanderthal grave.

Yarrow flowers and leaves are said to contain more than 80 biologically active compounds, but the most commonly recognised useful ingredients are alkaloids, flavonoids (plant-based chemicals that help to improve digestion), azulenes and sesquiterpene lactones, which have antibacterial and anti-inflammatory properties.

The German Commission E has approved the use of yarrow for mild stomach ailments and loss of appetite. Yarrow’s antibacterial and anti-inflammatory properties are well documented and the herb is recommended for patients with kidney complaints to ward off pain and fight infection. It is also thought to act as an antispasmodic.

Yarrow is prescribed to:

Fresh young yarrow leaves have a slightly bitter taste that is perfect in salads (try it in potato salad), on sandwiches or in a dip.

Yarrow is a member of the aster family and is closely related to chrysanthemums and chamomile. An upright evergreen perennial with a hairy stem and feathery leaves, it grows well in a sunny and warm habitat in rich, well-drained soil. White, pink or purple flower clusters appear in summer, attracting bees, butterflies and other beneficial insects. The plant spreads rapidly, so will need cutting back to prevent it becoming invasive.